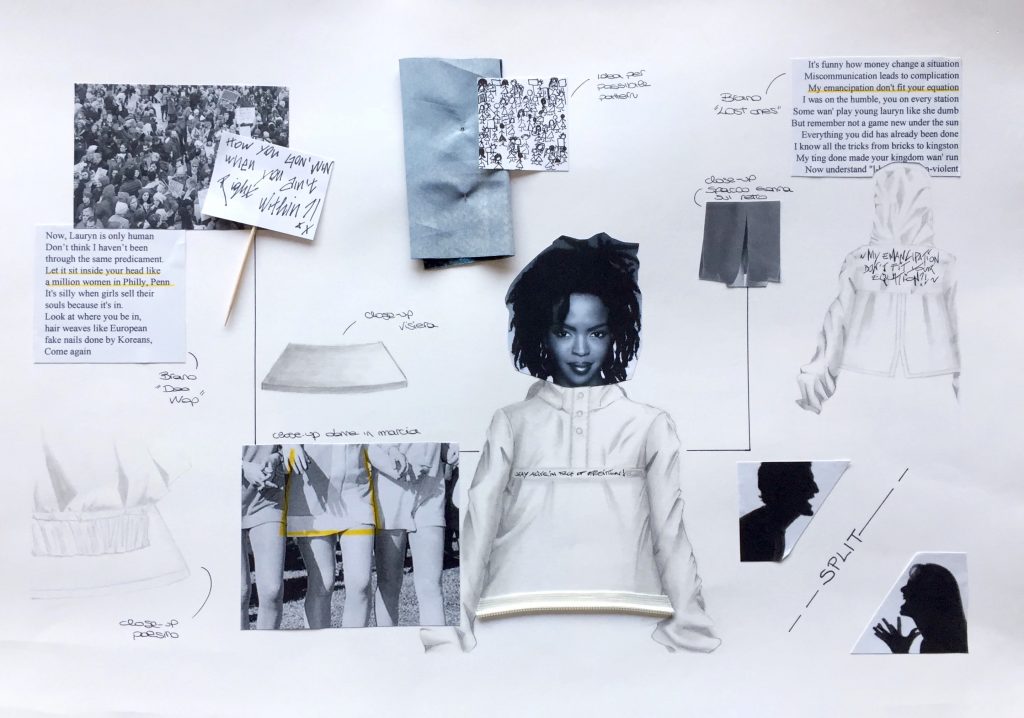 The project “The Miseducation of Lauryn Hill” was set up in order to commemorate the 20th anniversary of the homonymous album of Mrs Lauryn Hill, developed inside the American hip-hop scene of the 80s and 90s.

This album deals with questions about love, love breakups and how to get over them through forgiveness. From the succession of the tracks, we recognize the path of personal growth of the artist in search of herself. In fact, rhyme after rhyme, she explains to us what she defines as “life lessons that are not taught behind a school desk”.

Through the metaphor of undressing, Arianna decided to reveal this maturation, developing the drawing boards backwards: starting from the outerwear, in which Lauryn shows us her strength and her independence in response to a betrayal, to the jacket with pants, where what comes to light is the other, equal and opposite reaction: vulnerability. With the outfit shirt and skirt the rebirth takes place, the rediscovery of the little girl inside herself, through the most heartfelt memories of her childhood, then ending up with the dress, the climax, the point of arrival of her research, when she finally manages to accept and love herself, to forgive and love the others. This happens when Lauryn becomes a teacher. 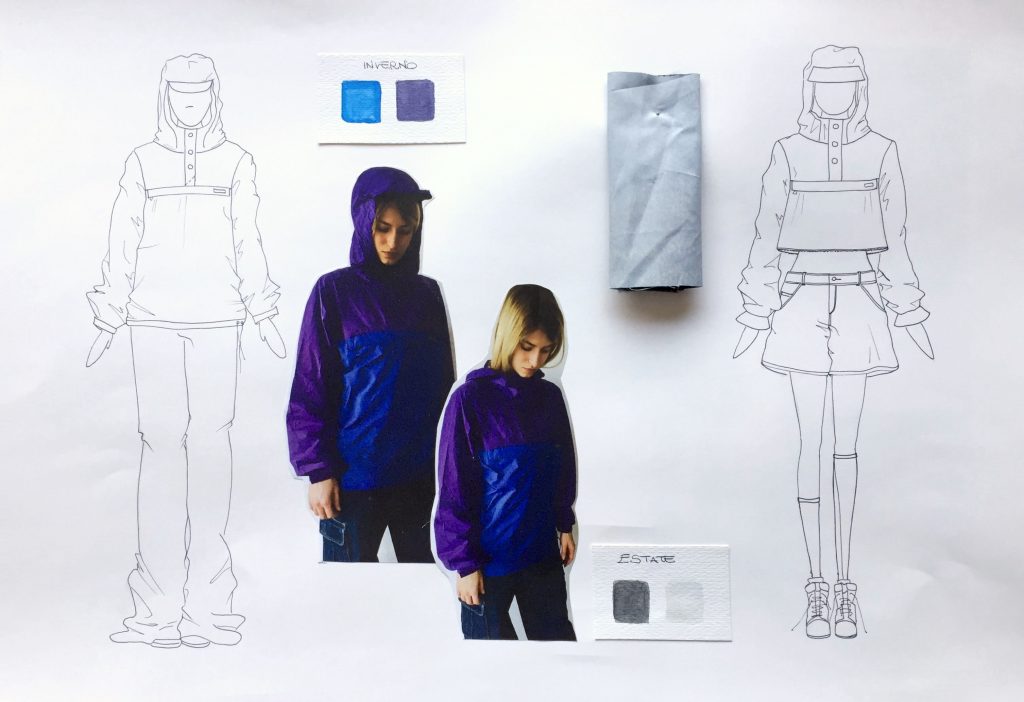 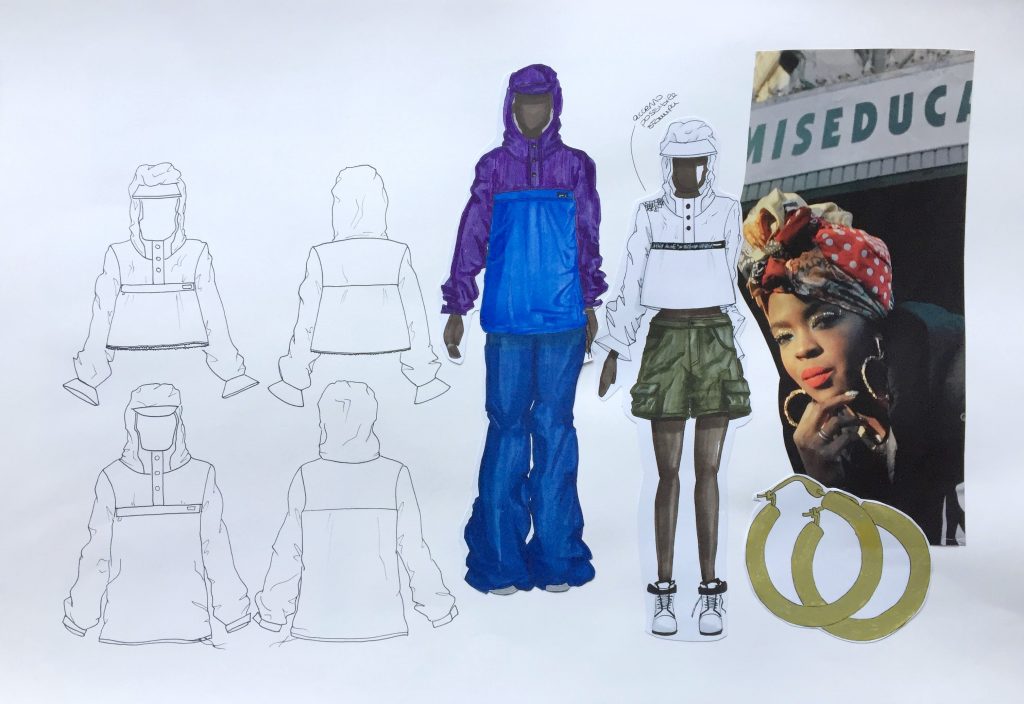 The first sequence represents the will of independence and the rage of the brokenhearted artist, who finds herself betrayed by her group “the Fugees” and especially by his lover Wyclef.

In the song -Doo wop- , Lauryn makes a comparison between the march of Philadelphia, when people took to the streets to promote a change, to protest in order to make their rights be listened to, and herself, who is trying to prevent women from “selling them selves because it’s a trend”, which means she wants to stop this insane social structure, based on materialism and sexualization, in which women have to sell their person in order to gain men’s attention, not respecting themselves.

It’s time for a change, to finally emancipate, so, starting from the vintage k-way she has, Arianna changes the volumes, the colours and the pattern: taking inspiration from the skirt of a women of that march, she shortens the length of the k-way and she flares it, as well as the visor and the cuffs. Moreover, she adds a slit on the back and some writings like “stay alive in face of opposition” from the track – Forgive them father – and “My emancipation don’t fit your equation?!” from – Lost ones -. In the end, she applies a zip, which stands for the hem, which is a symbol of the split between Lauryn and her group, Lauryn and her lover and female and unfair social laws. 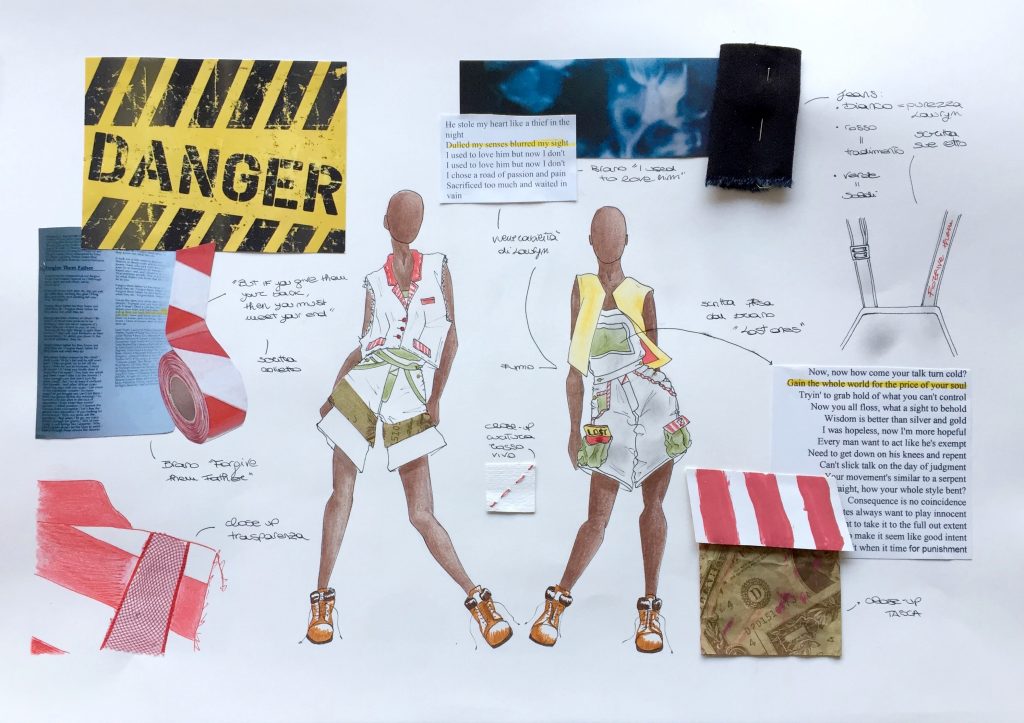 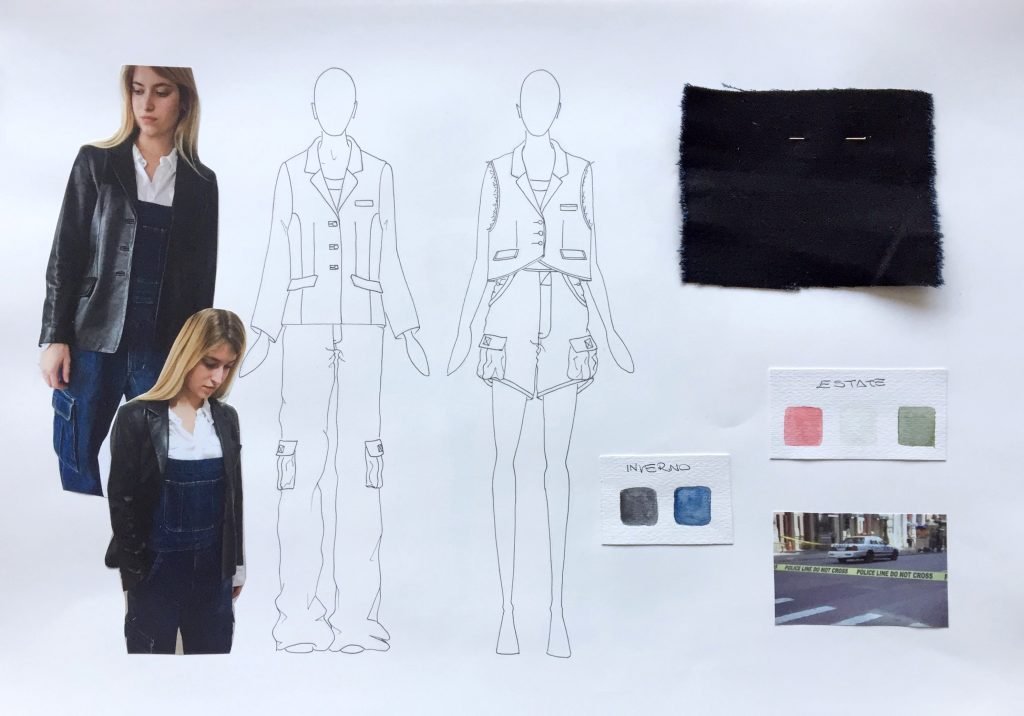 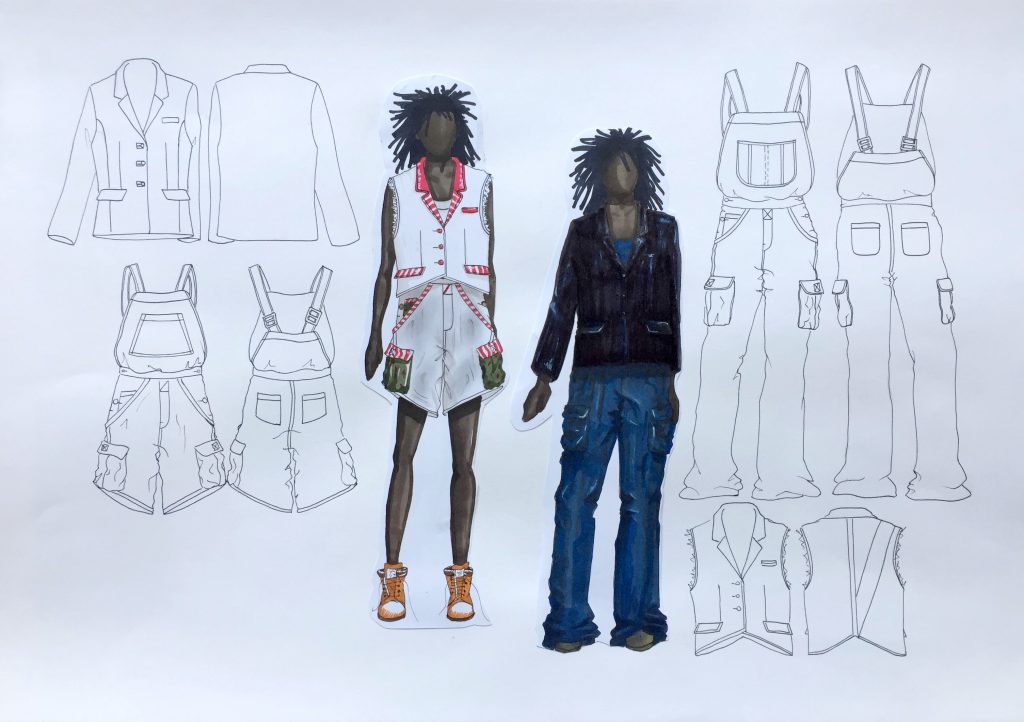 The second sequence represents the other reaction, equal and opposite, to a betrayal: vulnerability.

What were simple blue baggy dungarees in winter, become an atomic bomb in the summer season. In fact, Arianna chooses to maintain this rough material, perfect for the contest of a ghetto, but she changes the colours, shedding a light on the true meaning of this outfit. The white innocence of the young singer gets dirty: too much blood has been spilt, too much pain has been felt.

From the track -I used to love him-, we get to know Lauryn’s insecurities, how confused and vulnerable she feels and her sight gets blurred as her eyes get full of tears. For this reason, a misty smoke colours the dungarees, which report the writing “Gained the whole world for the price of your soul !?” on a green background, symbolic colour for dollars, and “Lo$t” and “one”, separately, inside the two pockets, both taken from the iconic track -Lost ones-. As a matter of fact, not only has the betrayer lost Lauryn, but also himself and his place in Heaven, all due to his avidity.

The blazer instead changes from leather to denim, it becomes sleeveless and striped painted, taking inspiration from the signals which point to a danger, from the strips on a crime scene or used to signal some work in progress, but it still maintains the red and white for figurative blood and innocence.

Since the Afro-American artist states “ But if you give them your back, you must meet your end” in the song -Forgive them father- , Arianna decides to create a transparency in the back, letting the observer be aware of the stab in the back of Lauryn, just in correspondence with the shoulder strap of the dungarees, where there is the writing “forgive them”, to give emphasis to the greatness of Lauryn’s heart. Indeed, in that track, Lauryn recognizes the wickedness of her traitors, but through the love in God she can now manage to forgive them. 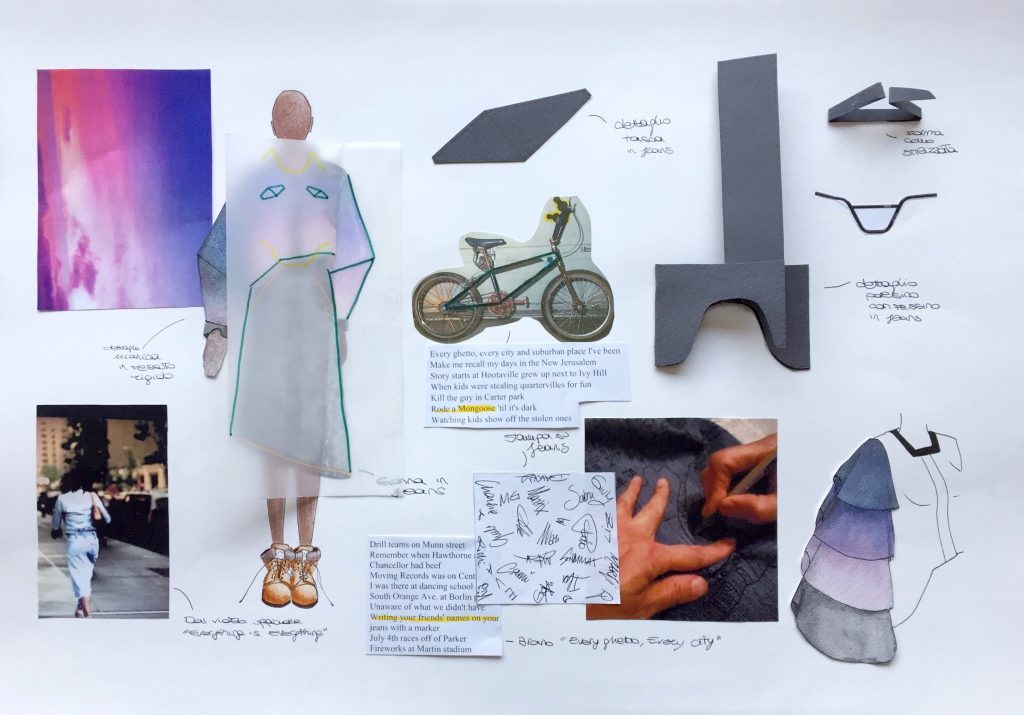 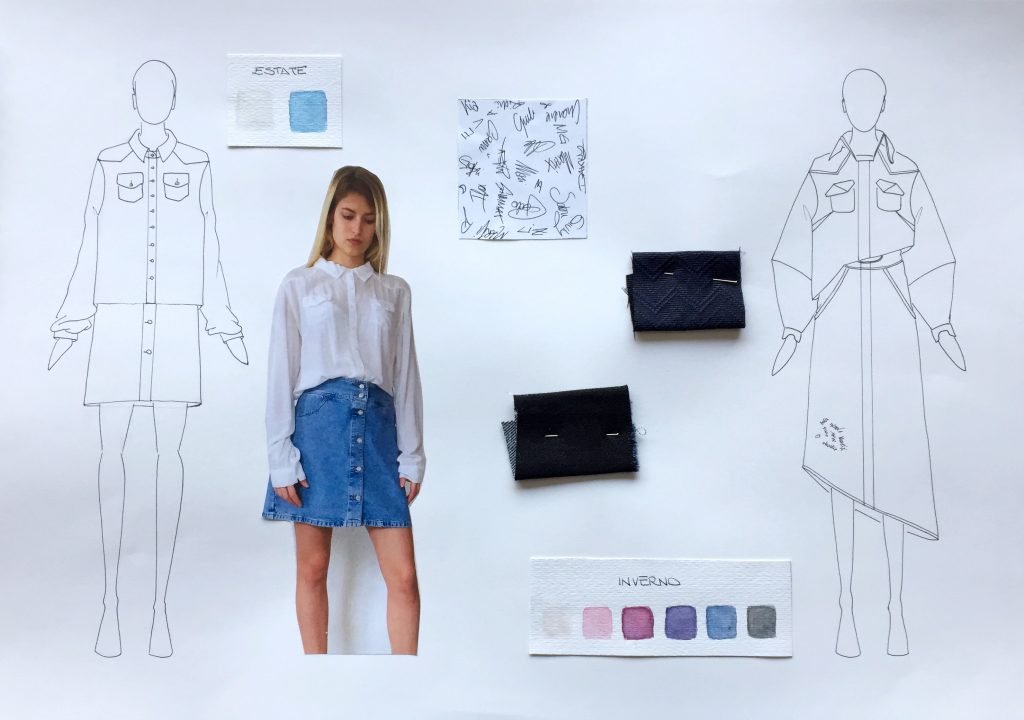 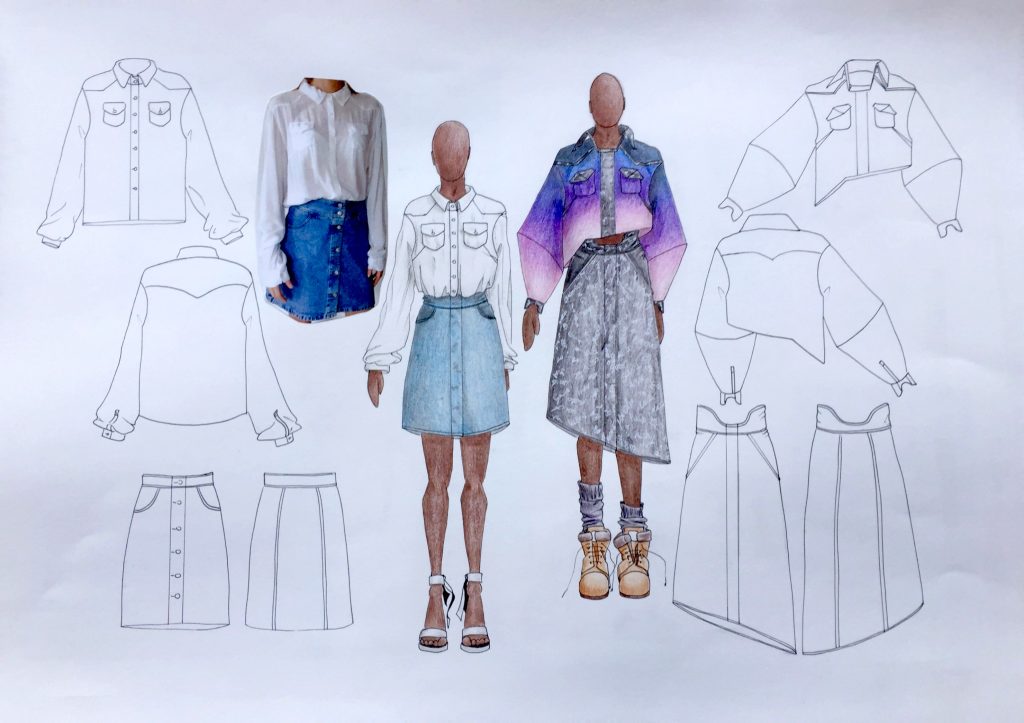 The third sequence, instead, deals with rebirth: Lauryn discovers herself as a child, beloved and joyful, in the track -Every Ghetto, Every City-, in which she focuses mainly on the games, the streets and the good time spent with her friends. Arianna takes inspiration from Lauryn’s long rides, lasting till darkness, on her Mongoose, the bike of her childhood, and the custom of writing the names of one’s friends on one’s jeans. In fact, Arianna paints the shirt with the colours of the sunset, creates a pattern with all her friends’ name on the denim of the skirt and gives birth to new forms and cuts to the pre-existent cloths, using the frame, the old-school handlebars and the rays of that particular bike. 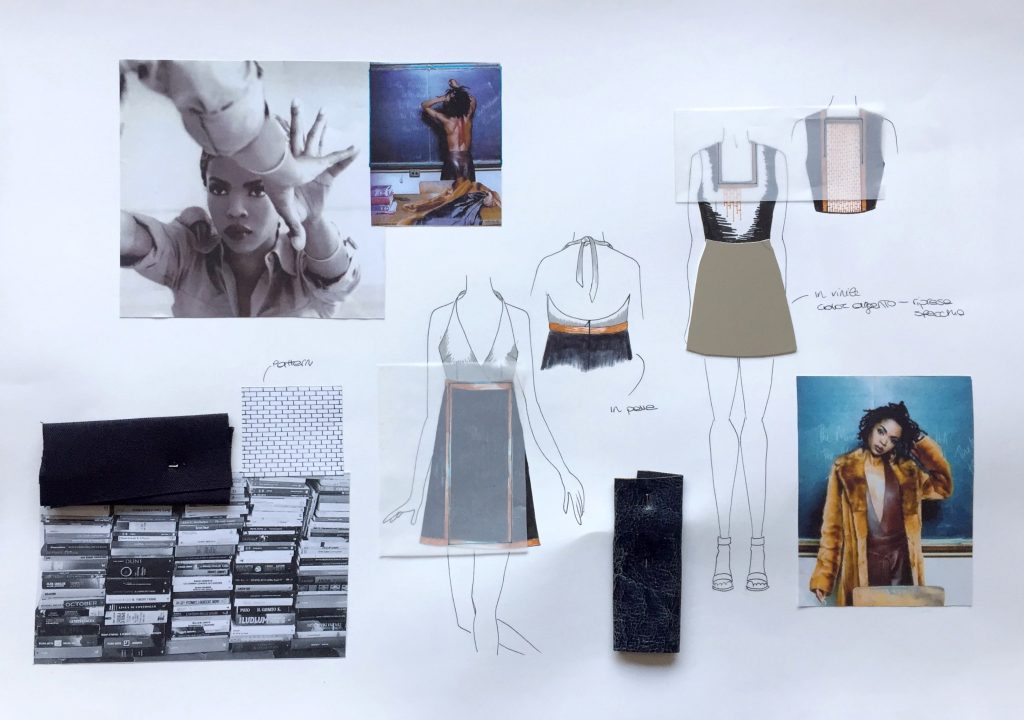 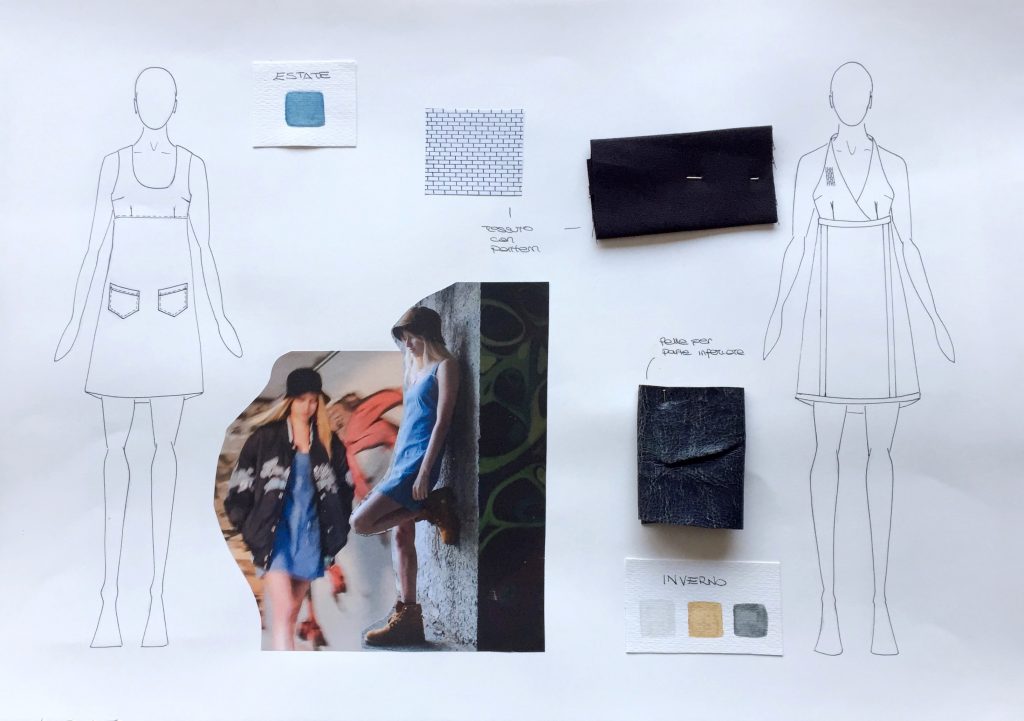 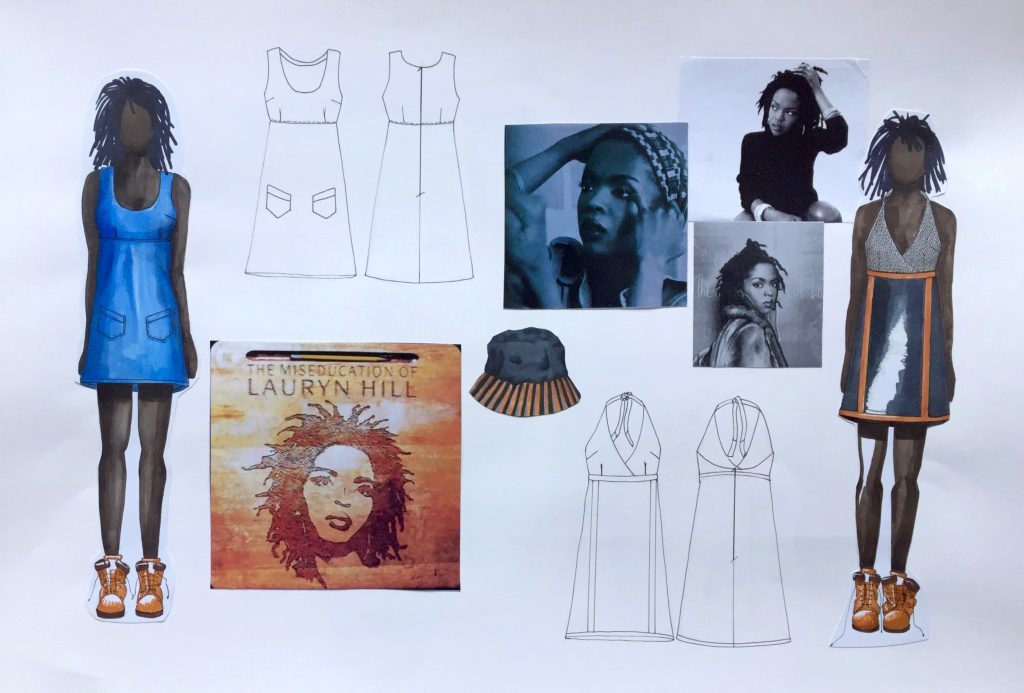 In this last sequence, Lauryn is finally renewed: throughout the love in God, she managed to accept her past mistakes, learning tough lessons: to love herself and, by this, to forgive and love the others. Lauryn watches through herself and finally sees her inner self, feeling truly pleased and fulfilled, capable of anything, a real master of herself. The path from an improper to a proper love has brought her to change from a girl to a woman, from an innocent student to a conscious teacher. For this reason, the new material chosen for the dress is leather, as a metaphor of the new skin Lauryn is now wearing and the pattern created is made out from both a series of stylized blackboards and an orderly arrangement of overlapped books with a view to recalling the building of a solid wall, an education built brick after brick, book after book, track after track.

Thanks to Lauryn’s messages of being humble, respecting yourself and “keeping it real”, we can learn how to grow, how to improve, how to face everyday life carrying on learning.

We all have to be forever grateful to this great artist, whose art gives us a true and genuine example of a great human being. Thank you Mrs Lauryn Hill.